Many churches doing Imag on a budget turn to the Blackmagic Design’s ATEM as their switcher of choice. It’s an affordable option with a great deal of features.

We purchased ours almost 4 years ago for use in an all-volunteer, 5-camera Imag setting.  We launched Imag after being in our building for a few years.  At that time we had 3 cameras feeding the ATEM and we controlled it with an iPad app (Strata Pro).

After some reliability issues with the iPad’s WiFi connection we moved to an in-house developed PC-based solution. This was a piece of custom software; running on a touchscreen Windows tablet.

This custom software took advantage of the very comprehensive Blackmagic ATEM SDK. The development was fun and quite rewarding. The interface was streamlined – including only the items that we used. Through this development, we made life (and training) much easier for our all-volunteer video directing staff.

One consideration with a touchscreen solution is the tactile feedback. An onscreen slider is not the same as a physical T-bar. Even with a “dead zone” at the ends, the onscreen slider was sometimes left short of an end stop due to the “stick-slip” of fingers on glass.

The next step in our journey was to assemble a hardware interface box modelled after the software we had been using. This was a great success as we had the simplicity of a custom interface with the ergonomics of a hardware surface. The Arduino-based hardware surface originally used a USB/Serial interface to the PC and later a direct LAN connection to the ATEM.

One of the reasons for this journey through ATEM control surfaces is the fact that Blackmagic’s original ATEM Broadcast Panel was priced in the neighborhood of $5,000 USD. That changed a few months ago; which takes us to one of our current favorite things: the Blackmagic Design “ATEM 1 M/E Advanced Panel”.

When comparing the “Advanced Panel” to the original counterpart “Broadcast Panel” we see the full potential of “going digital” in terms of interface design and configurability/usability. Many more features were added, and yet the price was reduced (yes, I said “reduced”) to just under $3,000 USD.

• Program and Preview buttons are all assignable (who says camera 1 has to be first?)

• Buttons are slightly smaller than some control surfaces. This only took a few minutes to get used to, but it is worth noting.

• The “Auto” button is somewhat underneath the T-bar. Again, not a big deal, but something we noticed.

• For us, the added functionality did require that we provide some additional training for our directors – reminding them that with this greater power, comes greater responsibility… and a greater chance of “pushing a wrong button”.

In summary, if you are using an ATEM and ready to make the next move, the Blackmagic Design Advanced Panel is an amazing piece of hardware at an attractive price. 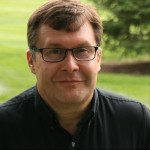 Mark is a volunteer at The Ridge – (www.theRidge.org). He leads a team of around 30 volunteer camera ops and directors making awesome-as-possible 5-camera Imag while trying to do it as affordably-as-possible.

The Broadcast Audio Guy Should Be Fired!